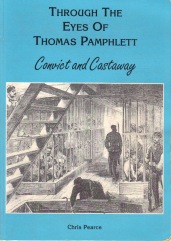 Here are some reviews on my nonfiction book (now an ebook by Australian eBook Publisher) on the early 19th century Australian convict, Thomas Pamphlett, Through the Eyes of Thomas Pamphlett: Convict and Castaway.  Details of where the ebook can be obtained (Amazon, Kobo, Apple and Google) follow the reviews. (Is line spacing at WordPress always just hit and miss?)

See https://www.goodreads.com/book/show/23675896-through-the-eyes-of-thomas-pamphlett
or individual reviews …
By Valery · ★★★★★ · June 14, 2017 –
Through the Eyes of Thomas Pamphlett: Convict and Castaway by Chris Pearce tells an engaging story of history as well as crime and punishment in the not too distant past. Pamphlett began life in horrific conditions in Manchester, and worked as a brickmaker at a young age. The way in which Pearce… …more
By Maranda · ★★★☆☆ · June 14, 2017 –
To be totally honest, I had never actually heard of Thomas Pamphlett before reading this biography. “Through the Eyes of Thomas Pamphlett: Convict and Castaway”, written by Chris Pierce, is an interesting look at the life of a man that held plenty of adventure, danger, crime, and drama. This hist… …more

By Kimberly · ★★★★☆ · June 18, 2017 –
This is a well written non-fiction historical by Chris Pearce. The author does a wonderful job with providing details and really painting the locations and time frame for the reader. It wasn’t hard to really feel that you were part of the story as you read along. I found that I really further und… …more

By Grady · ★★★★★ · May 18, 2015 –
`Whether Pamphlett learnt much at school, other than fighting, swearing and thieving, is doubtful.’
As British-born Australian author Chris Pearce states in his book’s preface, `After 25 years in federal and state public service and 12.5 years in two stints in the real world, I am now writing eBoo… …more

By Kay · ★★★★★ · August 30, 2015 –
Excellent Historical Fiction
Through the Eyes of Thomas Pamphlett is a historical/non fiction novel about Thomas Pamphlett. Author Chris Pearce does an excellent job describing his life and journey through his 25 days as a castaway. It’s truly a fascinating story, and you can tell that Pearce did… …more

By Veronica · ★★★★★ · July 09, 2015 –
Through the Eyes of Thomas Pamphlett is a historical/non fiction novel about Thomas Pamphlett. Author Chris Pearce does an excellent job describing his life and journey through his 25 days as a castaway. It’s truly a fascinating story, and you can tell that Pearce did a lot of research for this b… …more

By Karen · ★★★★★ · August 31, 2015 –
Thomas Pamphlett was an Australian convict on a 25 day castaway journey. I have known a bit about him and his life, but was interested to learn more because I find his story fascinating. When I found this book by Chris Pearce, I just knew I had to read it. I am impressed by the author’s writing s… …more

By Marisa · ★★★★★ · May 19, 2015 –
Awesome story. I mean seriously? It is non-fiction and the man, Thomas Pamplette, gets 14 years in prison for stealing a horse. With laws now adays you can commit murder and get less. Very interesting read about our not so distant past!! …more

Reviews and letters relating to the print version (which is virtually the same as the ebook, including 100+ illustrations)

‘Pearce’s book is much more than a history of Pamphlett’s life. [There are] whole chapters on the life of the convicts, the background and the general history.’ ‘The book comes with an excellent index, is well produced and well illustrated.’ Review by National Trust magazine, Queensland, April 1994, p.23.

‘This is more than the story or family history of one convict.’ ‘The photographs are wonderful …’ ‘… this work provides a guide to what family historians can achieve. I thoroughly recommend it to any one with an interest in any aspect of the convict system of colonial Australia.’ Review in Descent, the journal of the Society of Australian Genealogists, Sydney, vol.24, no.2, June 1994, p.78.

‘Mr Pearce is to be congratulated on his work on Thomas Pamphlett. He has written a detailed book on an important figure in the establishment of Brisbane, made that information easily accessible and placed it in the wider context.’ Review by Dr Michael White, QC, Journal of the Royal Historical Society of Queensland, vol.XV, no.9, November 1994, pp.455-456.

‘This book is not just good, it is outstanding …’ ‘Not only is it well written, it is easy to read, entertaining and above all accurate.’ ‘… it should find its place alongside other classics … such as … Robert Hughes’ [international best seller] The Fatal Shore.’ Letter from Mr John Sands, Wynnum Manly & Districts Historical Society, Brisbane, 25 March 1994.

‘What a magnificent book!’ ‘Congratulations! You’ve written one of the most fascinating, enlightening books I’ve read for such a long time …’ ‘[The book] was close to ‘can’t put down’ category for me – as it was for our daughter, who’s not a regular bookworm!!’ Letters from Mr Frank Warrick, newsreader, Seven Nightly News, TV Channel 7, Brisbane, 4 March and 5 May 1994.

‘[The book] is one of the most accurate accounts of our early history.’ ‘Chris Pearce skilfully contrasts the life of the Moreton Bay Aborigines with that of the white society of the day.’ ‘I take pleasure in recommending this book to anyone interested in Australian history and things Australian.’ Letter from Brisbane Lord Mayor Jim Soorley, 15 November 1993, who launched the book at City Hall.

‘Congratulations on a fine production.’ ‘I enjoyed the whole story very much, particularly the Moreton Bay section …’ ‘… the choice of illustrations was excellent.’ Letter from Ms Kathleen Hamey, the Balmain Association, Sydney, 14 January 1994.

Where to obtain a copy of the ebook

Summary of the book

The Great Daylight Saving Time Controversy is the encyclopedia or bible of DST. It includes the origins of daylight saving time and the history of the scheme in every country that has ever used it, plus each state of the United States, Australia and Brazil and each Canadian province. Read about the battles between supporters and opponents, the efforts of daylight saving time champions, the chaotic situations that emerged particularly in the US and Canada, and all the pros and cons of the measure.

Here’s where to obtain a copy of the book:

Or check out these articles: 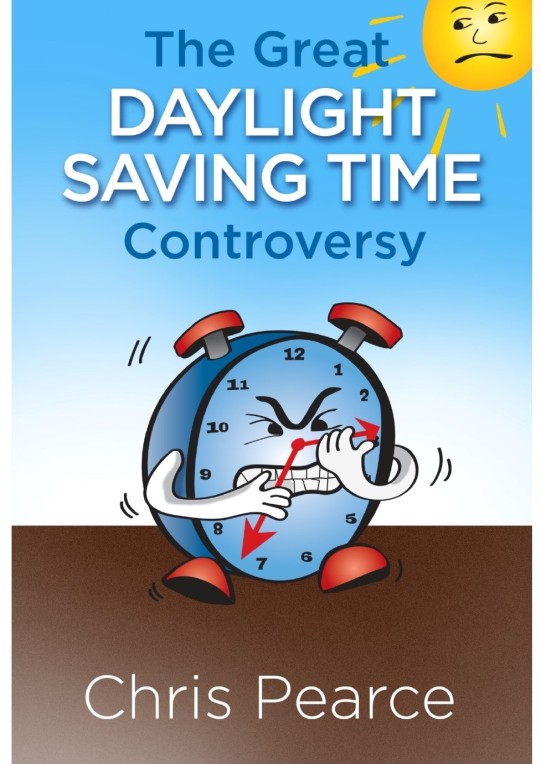 Here’s an excerpt from my ebook on daylight saving time, The Great Daylight Saving Time Controversy. The excerpt shows how a potential terrorist incident was thwarted due to daylight saving time. It’s looking at DST in Israel, in the chapter on Asia. The book can be obtained from Amazon, Kobo, iTunes and Google.

“Daylight saving in Israel has been surrounded by controversy. The area known as the British Mandate for Palestine had continuous daylight saving from 1940 to 1942 and then each year from 1943 to 1946. Part of that region became Israel on 14 May 1948 and nine days later it put its clocks on two hours to conserve energy as it fought with Arab armies from the second day of its existence. Neighbours Jordan, which took the West Bank, and Egypt, which occupied Gaza, didn’t use daylight saving. Israel finished daylight saving after 1957 but used it again in 1974 and 1975 following the global energy crisis caused by the Yom Kippur War.

Israel has had summer time each year since 1985, but in the following year the interior minister, Yitzhak Peretz, who was opposed to daylight saving, wouldn’t sign the annual order. Ultra-Orthodox rabbis such as Peretz feared that daylight saving would mean poor attendance at morning prayers and that shops and other establishments would open before sundown on Saturday, desecrating the Sabbath. There was public uproar over his non-signing that included a demonstration outside his house and a legal battle that nearly got to the High Court. The communications minister, Amnon Rubenstein, said his department would use daylight saving in any case. Energy minister Moshe Shahal stated that the scheme saved Israel up to US$6 million a year in energy and reduced traffic fatalities. In a fiery Cabinet meeting on 20 April 1986, Peretz yelled at Shahal, a supporter of daylight saving: “You have been shedding my blood! You have been organizing a public lynch campaign against me! I would not be surprised if what you have done will lead to attempts on my life!”[1] Cabinet voted 11 to 6 to continue with daylight saving.

The start and end dates of the summer time period were the subject of much contention over many years. Most of the secular population preferred daylight saving to extend as long as possible, whereas most religious people didn’t want it to start until after Passover and wanted it finished before Yom Kippur. Dates for each of these events can vary by a month or so, which means the daylight saving span could be quite different from year to year. This made it difficult for trade, computer systems, and society in general. Economists estimated that Israel would save US$80 million a year by standardising its calendar.

In 2013, after plenty of haggling, disagreements and compromises over the decades, Israel set its daylight saving period as the Friday before the last Sunday in March until the last Sunday in October to align closely with Europe. The move hasn’t stopped the opponents of daylight saving, with member Yifat Kariv introducing a bill in October 2014 to cancel the measure. The interior ministry estimated in 2015 that summer time saved the Israeli economy NIS 300 million or US$75 million a year. The ministry also believed that people’s physical and mental health was improved and road safety was better.

Confusion still reigns over daylight saving times in the region as the Palestinian National Authority, formed in 1994, has set different start and finish dates to Israel. On one occasion, the disparity was a blessing. In September 1999, four young Israeli Arabs received two packages of explosives set by Palestinian bomb makers to blow up on 5 September at 6:30 p.m. Two of the men drove a car with one of the devices to Haifa and the other pair with the second package in another car to Tiberias. One man from each team was to board a bus from each city to Jerusalem with the bomb package to go off during the trip, but to disembark part way and rejoin their accomplice in the car, leaving the bag on the bus. The first pair had parked their car, and one man had got out, while the other two were still driving to their initial destination when the bombs exploded, at 5:30 p.m., killing three of the terrorists. They had been operating on Israeli time, which had gone back an hour after daylight saving finished on 3 September, but the bomb makers had used Palestinian time, which was still an hour ahead until 15 October. The lives of perhaps several dozen innocent passengers on two buses were spared.” 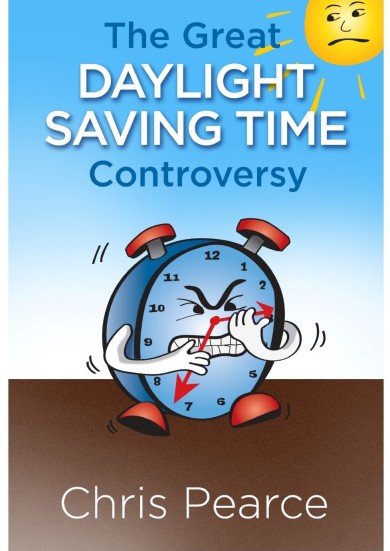